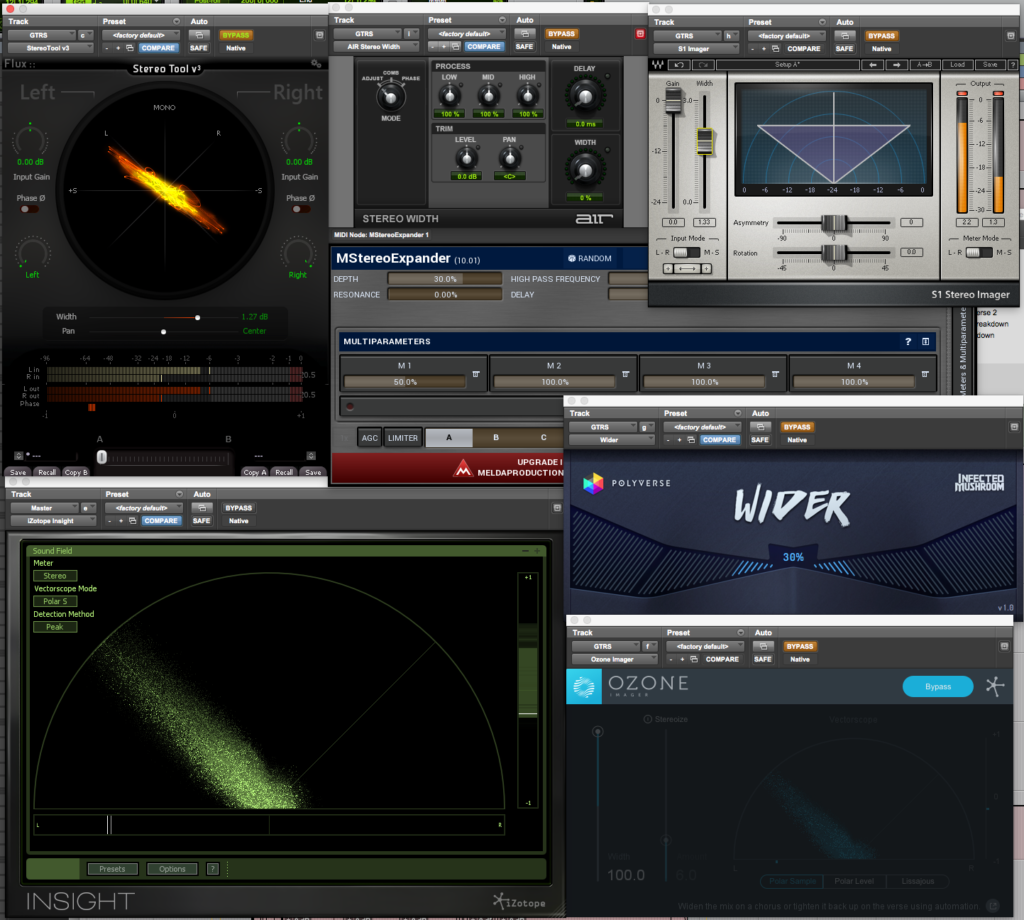 In no way was this a comprehensive test, as I only tested with a distorted guitar stem in a mix, and was mainly focussed on how mono compatible the plug-ins are, but below are my thoughts on that aspect of each.

AIR Stereo Width – A standard Pro Tools plug-in that is included in the AIR Creative Collection. This plug-in has 3 modes that all operate differently. In Adjust and Phase mode there is minimal phase cancellation and level differences, but in Comb mode there is significant phase cancellation. Has some tweakability of settings which can be handy depending on what you are trying to achieve.

Waves S1 Stereo Imager – You can hear some serious phase interactions as the width control is pushed to its extremes. Listening in mono they seem to have a good control over the overall level of the output though as the width is adjusted.

MeldaProduction MStereoExpander – Part of a demo bundle I have. I can’t say I am that into the interface, but it does provide some tweakability. When listening in mono this plug-in seems to do very little damage in terms of phase cancellation or level differences which is good.

Polyverse Wider – Freeware plug-in. This thing really has its own sound. It isn’t at all neutral. Pushing the Width wider results in a more phasy sound and more level. On the guitars I was testing on it actually sounded pleasing at lower amounts of width, but definitely adds some colouration.

Izotope Ozone Imager -Freeware plug-in, which is basically a component from Izotope’s mastering focussed plug-in Ozone. No colouration or level changes when listening in mono. This plug-in is very simple and transparent.

All of these plug-ins have slight differences in the way they might sound or cancel down to mono. I found the AIR Stereo Width in Adjust Mode, MeldaProduction MStereoExpander and Izotope Ozone Imager had minimal to no issues with level differences and phase cancellations when the stereo mix in monoed. The AIR Stereo Width and MeldaProduction MStereoExpander have a great deal of tweakability if that is beneficial to you, but for me personally, I love the clean and simple interface of the Izotope Ozone Imager with its built-in Vectorscope. The Waves S1 Stereo Imager also has a good handle on level differences when monoed, but the tone does get effected more than those others.

I found the Polyverse Wider to be quite different to the other plug-ins in that it seems to be more coloured and more of an effect, but it might do cool things on some source material. I am a little surprised because Polyverse’s marketing materials for the plug-in say that “Wider cancels itself out when summed to mono, so the original signal is left intact.” In my limited playing around with the plug-in I found that not to be the case, and monoing an effected sound had a quite noticable phasiness to it.

Polyverse Wider might be cool on some material though with its phasy colouration.

Both of these plug-ins are free.

It was a pleasure helping out with sound for the A